Klavon’s mission is dedicated to creating authentic experiences and handcrafted, artisan pizza. Set in a modern, comfortable atmosphere, that’s perfect for any occasion. The pizza is the star of the show and the one of a kind Chicago-style stuffed pizza rivals some of the best pizza from the Windy City. One thing is certain; pizza lovers travel regularly across Michigan for the Klavon’s experience.

This isn’t the first-time owner and pizzaiolo Justin Klavon has built a successful pizzeria. At age 16, while delivering pizzas in Grass Lake, he learned the basics of perfecting the craft. Within a few years, his self-motivation and determination led him to pursue his dream of opening a pizzeria. In 1998, as a young 19-year-old entrepreneur he introduced Justin Tyme Pizza, a take-out and delivery concept, offering delicious pizza and sandwiches to the Jackson area. His continuous experimenting and dough testing helped perfect the pizza recipes, allowing him to expand the business. By 2001, the second Justin Tyme Pizza opened in Napoleon and shortly thereafter a third location opened in Grass Lake. This fast-paced industry excited Justin and it seemed he was beginning to master the pizza business, but the self-taught pizzaiolo dreamt of more.

In 2007, after 9 years in business, all three Justin Tyme locations were sold. With experience and knowledge of the pizza industry Justin was ready to take his pizza journey to the next level. The foundation of his new restaurant concept – an upscale, sit-down pizzeria, offering new pizza styles served in a comfortable, clean environment. Later that same year, Klavon’s Pizzeria and Pub was launched, operating mainly as take-out and delivery with limited dine-in seating. With good food at a fair price it was no surprise that popularity for Klavon’s grew rapidly. As the dine-in demand increased, pizza delivery was soon removed from the business model and improvements to the restaurant began to unfold. Increased seating, large TV displays and a full-service cocktail bar were added to enhance the dining experience. The restaurant décor was designed to include modern, earthy materials, vibrant sports themed murals and music videos to complete the ambiance. Though the menu has stayed true, occasionally new specialty pizzas are introduced, reflecting fresh ingredients and trending pizza styles. Klavon’s unique spin on the original Chicago-style stuffed pizza has earned them a spot at the top and has become a talked about fan favorite. One thing is certain Justin’s hard work building on quality, along with his passionate employees has driven them to exceed the standard.

Daily long lines and lengthy wait times made it clear that it was time for an expansion. In June of 2014, a second Klavon’s was built in Vandercook, quickly earning rave reviews and a loyal following. This state of the art location displays modern, sports theme décor while also introducing an authentic wood-fired oven serving Neapolitan-style pizza and a relaxing outdoor patio. Along the way there have been many changes, but the fact is Klavon’s never deviates from its mission of handcrafting excellent pizza and executing a high standard of service.

Today, Klavon’s has nearly 200 staff members and serves over 500,000 guests annually. A third location in Mason opened in early 2019 and Justin has no intentions of quitting anytime soon. When asked how many stores he wants to open, he replies, “It really depends on the people I have around me. If I have the right people in place who want to continue moving forward, then we will continue to open more restaurants. It’s really up to my team how far we go.” 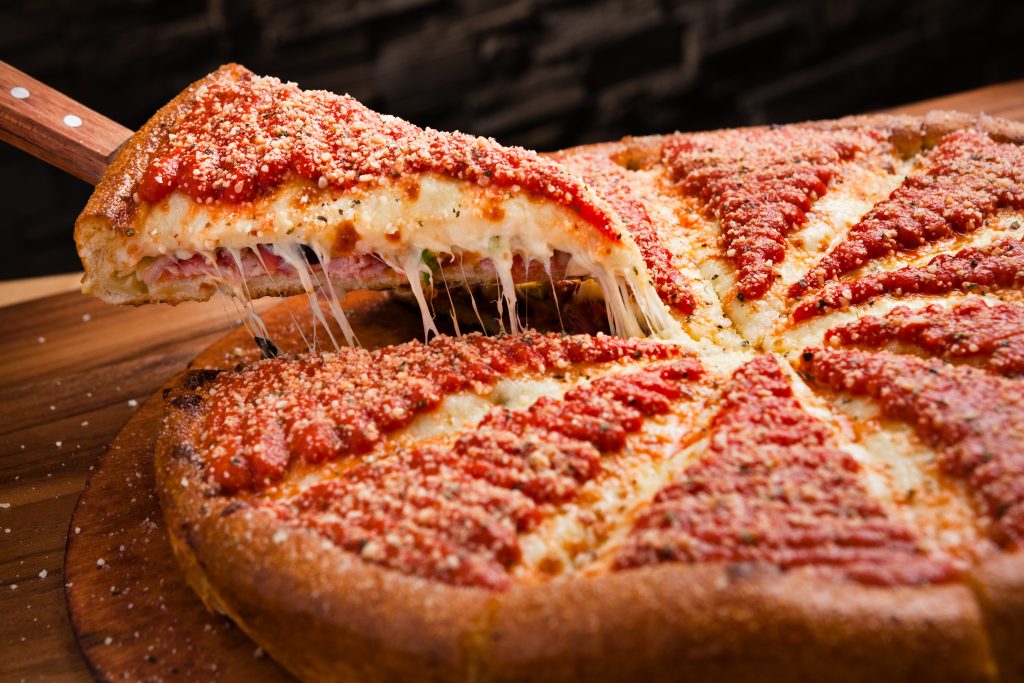